Waterproofing the observation deck of the Hamburg Michel

The Hamburg Michel is one of the Hanseatic city’s most famous buildings. The 132-metre-high spire of the protestant St. Michaelis Church has been a highly visible landmark for ships sailing up the River Elbe for hundreds of years. The 106-metre observation deck is popular with locals and tourists alike and provides a fabulous panoramic view across the city. In May/July 2014, the specialist roofing contractor Bade Dächer was appointed to re-waterproof the roughly 100 m² “balcony” using KEMPEROL. An anthracite-coloured KEMPERDUR® Surfacing was chosen as the heavy-duty wearing course, which has to withstand the footfall of more than one million visitors a year.

The church, which was finished in 1669, is considered one of the finest baroque churches in northern Germany. The original building was destroyed by fire (lightning strike) in 1750 and its replacement suffered the same fate in 1906 after a fire started during construction work on the roof. The Michel was then rebuilt for a third time. Although it kept its familiar outer form, the original timber structure was replaced with a <br/>steel and concrete design. The red brickwork of the baroque church gives it <br/>its characteristic look. Master roofer Hermann Bade, whose 94-year-old family-run business specialises in complete solutions for historic and modern buildings, was entrusted with carrying out the project. The company is a member of the German cooperation “100 Top Dachdecker” (100 Top Roofing Contractors) and is certified by external bodies to ensure “the outstanding quality of our work is always maintained”.

Due to the complex round shapes and many structural details it was decided to use liquid applied waterproofing. As it offers durable performance even in confined spaces and on almost any substrate. Furthermore, KEMPEROL is a cold applied liquid waterproofing, meaning there were none of the risks associated with hot works. Consequently, it minimised the risk of fire.

It was also important for the client that the observation deck remained partially opened due to the large number of people wishing to take in the fantastic view across the city. The idea was that visitors could still climb to the top of the church and enjoy the breathtaking scenery without too many restrictions even while the works were being completed. This was why the final decision fell in favour of solvent-free KEMPEROL 2K-PUR. The odourless product can be applied in sensitive areas with a fair bit of visitor foot traffic without causing unpleasant odours. The roofing specialists carried out the refurbishment project progressively during May and July of 2014. The parish requested a break in work over the Whitsun holidays. Luckily, longer periods of downtime are not a problem for the liquid applied waterproofing. New KEMPEROL can be applied to a cured layer of KEMPEROL without any negative impacts.

Site preparation initially required the milling of the old bituminous substrate, followed by the application of KEMPERTEC  EP Primer to enhance bonding and then the scattering of KEMPERTEC Natural Quartz NQ 0408. Waterproofing using KEMPEROL was carried out in line with the standard procedure: A waterproofing layer of Kemperol, a reinforcement fleece and a hard-wearing sealing coat of KEMPEROL. Since KEMPEROL achieves a full-surface bond with the substrate, it forms an impenetrable surface after fully curing. This surface is additionally characterised by its permanent elasticity.

Heavy-duty wearing course for over one million visitors

While the waterproofing protects the church against penetrating moisture from above, the top coat protects the sealant against mechanical loads. The vast number of visitors to the observation deck each year meant that a heavy-duty wearing course was required.

Hermann Bade and his team therefore applied KEMPERDUR® TC Surfacing, another solvent-free system, to the fully cured waterproofing layer. The universal wear and protective layer is designed for surfaces subjected to high mechanical stresses such as parking decks, driveways, covered walkways, balconies or, as in Hamburg, observation decks. The surface was resealed with KEMPERDUR® Deko Transparent and then scattered liberally with anthracite coloured Coloured Quartz, grain size 0.4 - 0.8 mm. The final task was to sweep off any excess quartz sand and to seal the surface with KEMPERDUR® Deko Transparent.

The finished surface structure is as follows:

Soon after, the Michel reopened with unrestricted visitor access and new waterproofing. 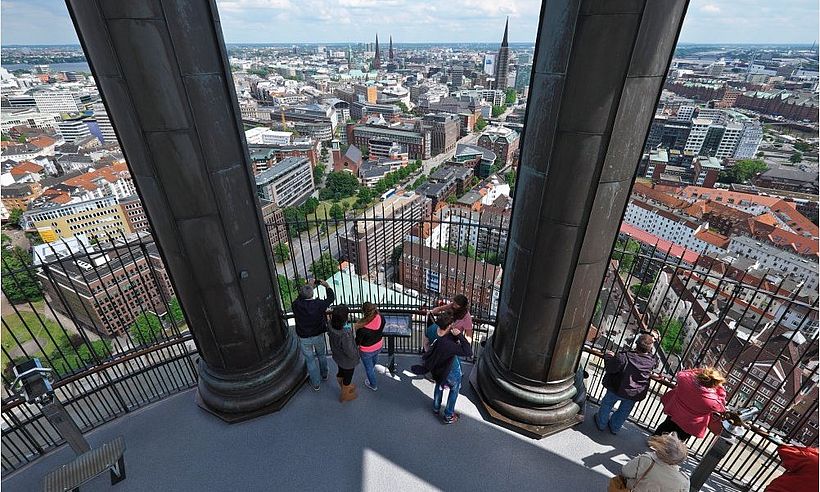 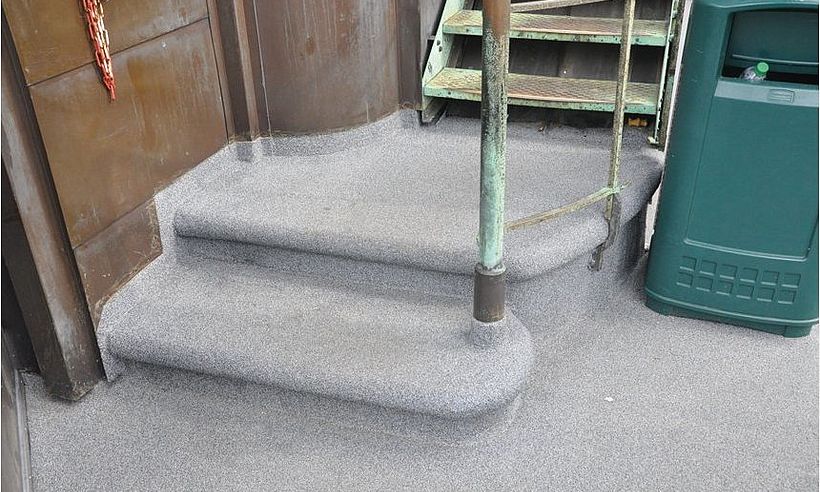 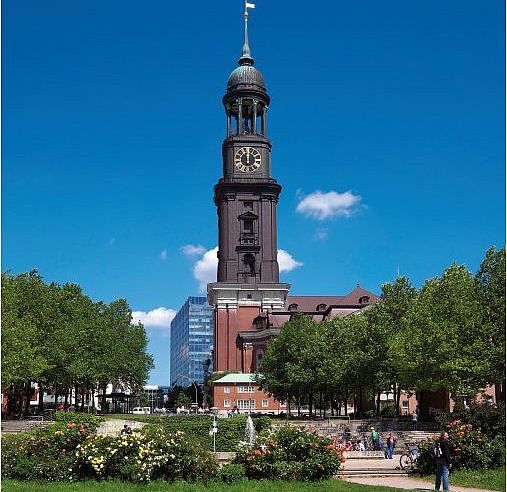 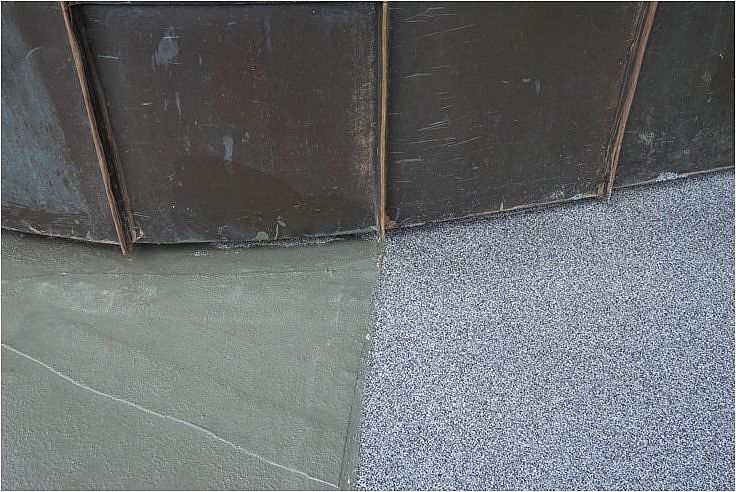 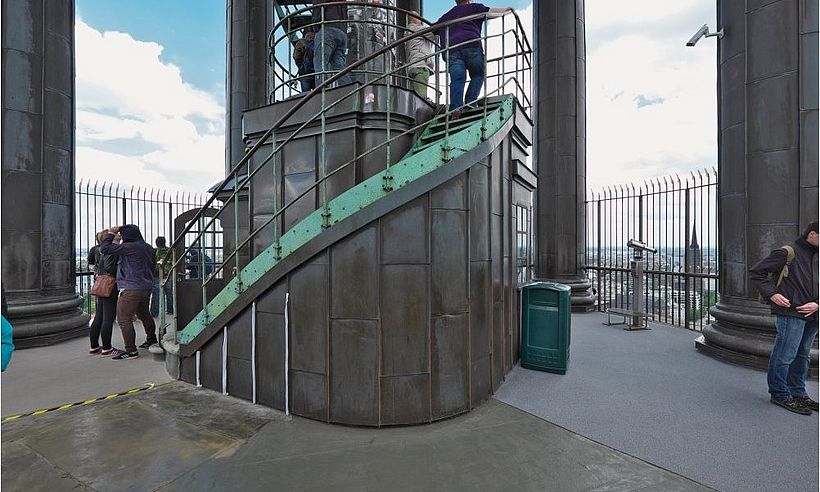 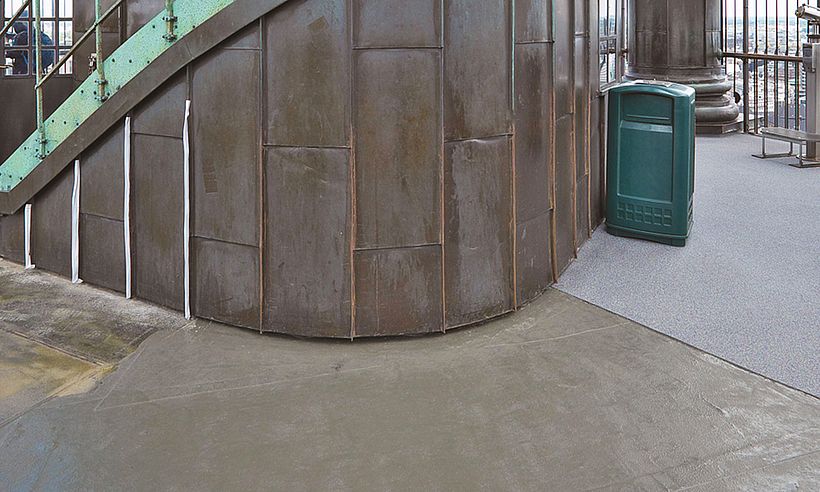 Waterproofing the observation deck of the Hamburg Michel

Project brief: Waterproofing and surfacing of a 106-metre-high observation deck